Wembley’s Twin Towers beckoned the winners. Leeds had beaten Bristol Rovers in the Third Round, Liverpool in Round Four at the second attempt, Cardiff City in the Fifth and Tottenham Hotspur in the quarters-final. Birmingham City had managed to get there without playing away from St Andrews with home wins over Port Vale, Ipswich Town, Portsmouth and Huddersfield Town in the Sixth Round in front of a crowd of 52,500.

Birmingham were managed by ex-United defender Freddie Goodwin, whose career had come to a tragic end while playing for them against Cardiff City at Ninian Park when he sustained a broken leg and a badly damaged ankle. He was not happy with the FA appointing Hillsborough as the venue and favoured Goodison Park, Maine Road or Old Trafford, but Leeds and Don Revie were happy to play the tie anywhere. Even the strip was a problem. United had submitted all white, all yellow, or all red, as there was an apparent clash with United’s all white and Birmingham’s blue and white stripes and white shorts. Eventually Birmingham turned out in red and white stripes and white shorts while United were in all yellow.

Terry Cooper had tragically broken his leg in the previous fixture at Stoke City. On the same day, reserve full-back Nigel Davey had broken his leg in a Reserve fixture against West Bromwich Albion. So the versatile Paul Madeley switched to left back with Mick Bates on the bench. There was a surprise between the sticks where Don Revie preferred David Harvey to the long time incumbent Gary Sprake, who was said to have failed a late fitness test on a knee.

He had always been recognised as one of the Football League’s finest keepers and David Harvey had always been his deputy, racking up over two hundred reserve appearances in the process, so it came as a shock to everyone, not least Sprake. It signalled the end of his reign as United’s keeper and he only made one more appearance in the league for United before he departed for Birmingham City for a then record fee for a goalkeeper of £100,000 in October 1973.

The ruling out of Terry Cooper for the rest of the season was a blow to United’s still high hopes of pulling off a League and FA Cup double. But while United had lost Cooper Birmingham City also sprang a surprise by naming eighteen-year-old Paul Cooper in goal in preference to the vastly more experienced Dave Latchford and also looked to another teenager, Trevor Francis, to give their attack plenty of zip and sting.

The teams entered the arena in front of a capacity crowd and they saw a slow start with both teams not wishing to give much away, but it was Birmingham who showed the first sign of aggression as Bob Hatton broke through but David Harvey was equal to the task and saved easily. United retorted and Allan Clarke blazed over their first chance from a Johnny Giles corner, while at the other end Harvey was again alert to deny Trevor Francis. United, however, started to dominate and took the lead in the eighteenth minute. Johnny Giles brought the ball out of defence and fed Mick Jones, who in turn found Billy Bremner free on the left. Bremner switched pay to the right flank where he found Paul Reaney on the overlap to set up Peter Lorimer on the edge of the box. The winger swiftly found Allan Clarke lurking on the edge of the six yard box, but instead of heading goal-wards he found the ever-present Mick Jones following up and headed it into his path and the centre-forward rounded off the flowing move with a firm header which gave the Birmingham keeper no chance. It was a typical United move; fast, direct, and surgically precise.

United kept up the pressure and a second goal soon followed, after twenty-four minutes. The move started with Mick Jones near the halfway-line, and he played the ball to Eddie Gray on the left, who then unleashed a forty-yard precision pass over the top of the Birmingham defence for Peter Lorimer to race onto. He held off his full-back and gave the keeper no chance with a low fierce drive. The Blues, well, Reds I guess, tried to respond to the double strike but David Harvey dealt easily a header from Bob Latchford but Trevor Francis gave him more trouble with a fierce free-kick.

Birmingham were lucky not to concede a penalty when a defender appeared to handle in the box, but the referee adjudged it to be ‘accidental’. Things were starting to hot up and Allan Clarke was booked for a foul on Trevor Francis and was followed by Birmingham’s Malcolm Page for a nasty foul on Billy Bremner, but United put the game totally out of reach when the made it 3-0 after sixty-four minutes. The architect was Johnny Giles, who outpaced Stan Harland down the right and drew the central defence to him before whipping over a centre beyond Paul Cooper’s reach and there was Mick Jones to perform the simple task of chesting the ball into the empty net despite attention from full-back Tommy Carroll.

The Birmingham central defender Roger Hynds was booked after clattering into David Harvey, but otherwise United coasted to one of their easiest Semi-Final victories and into their third final in eight seasons, which, of course, they won to claim their one, and to date, only, FA Cup win. 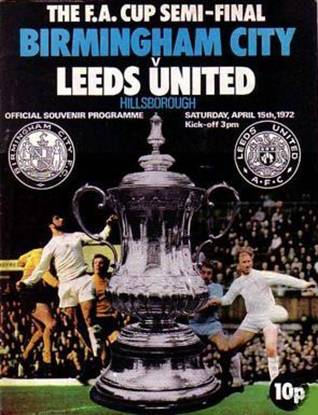 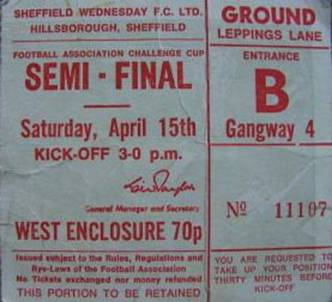 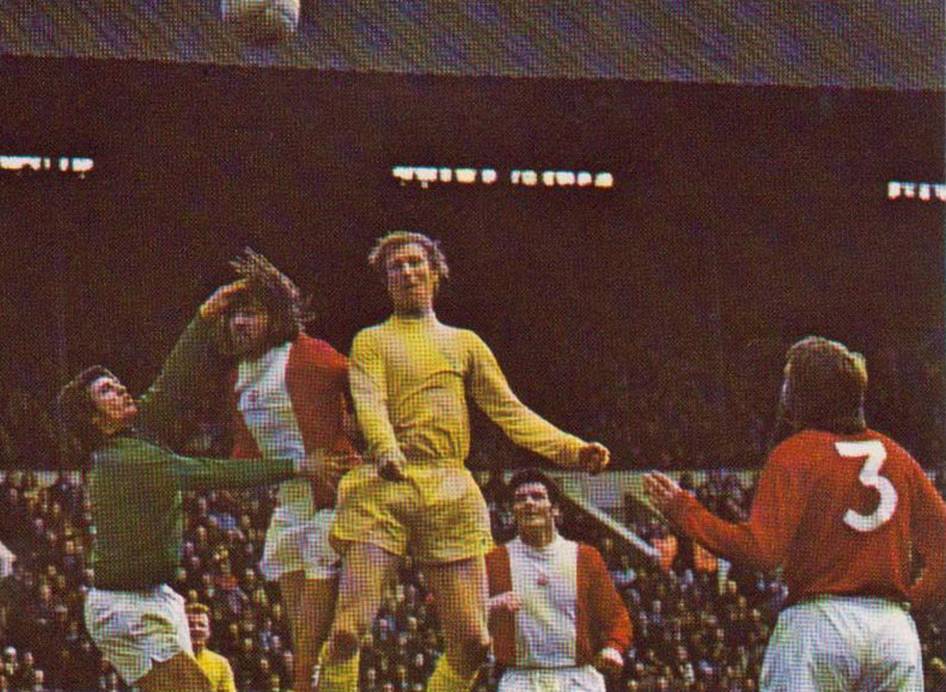 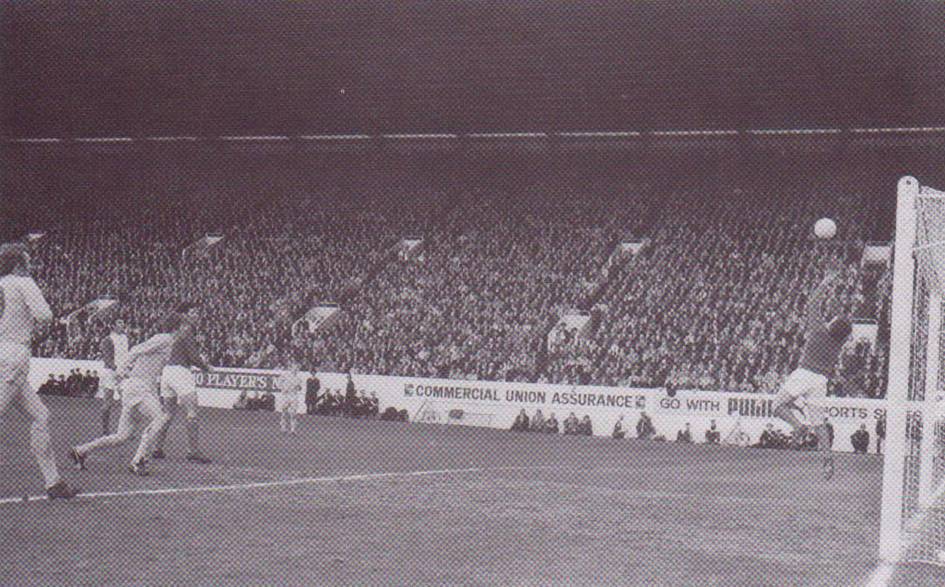 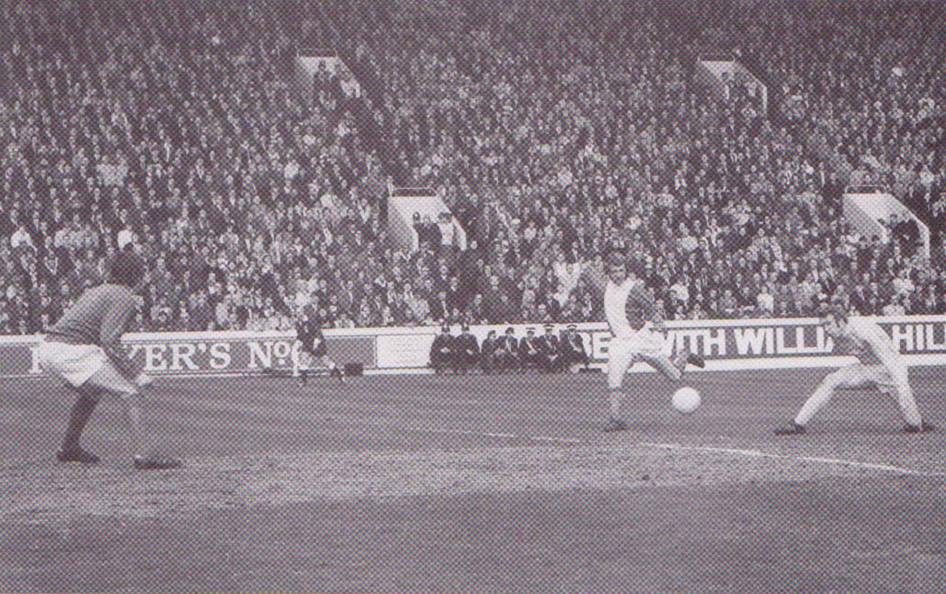 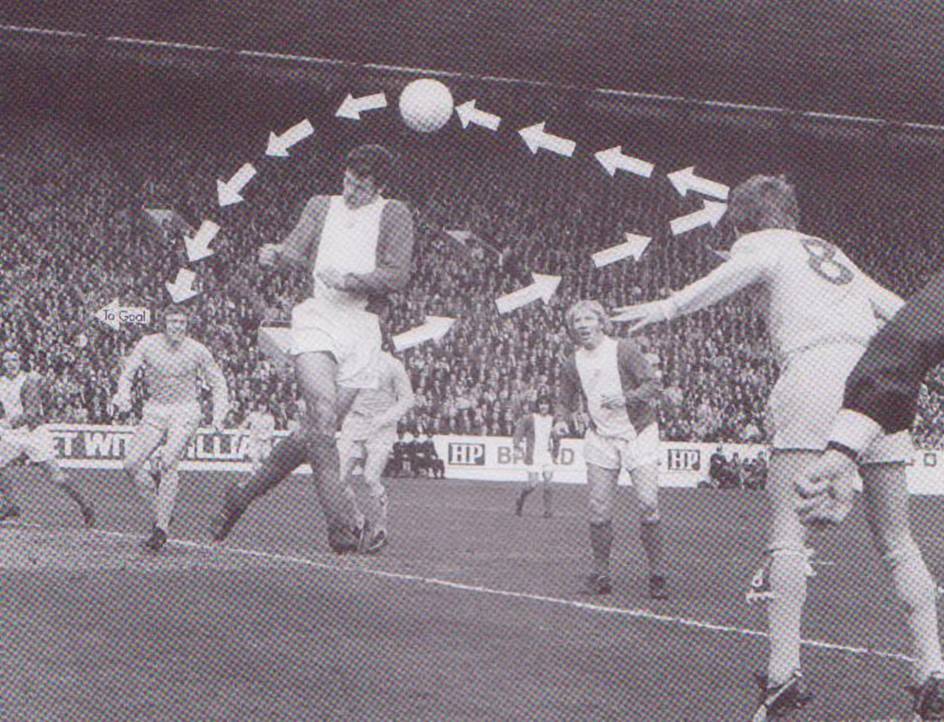 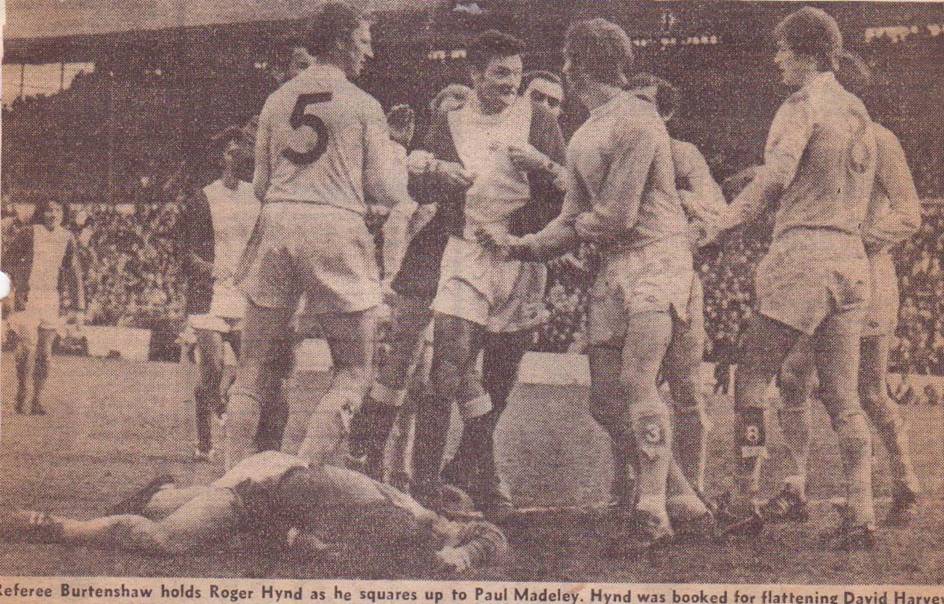 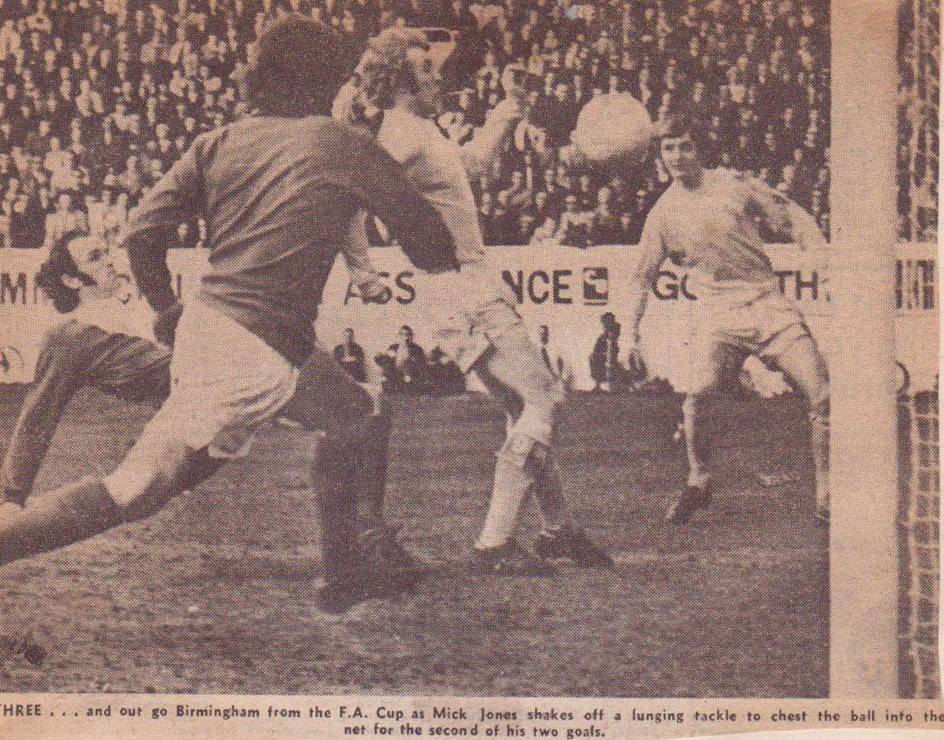 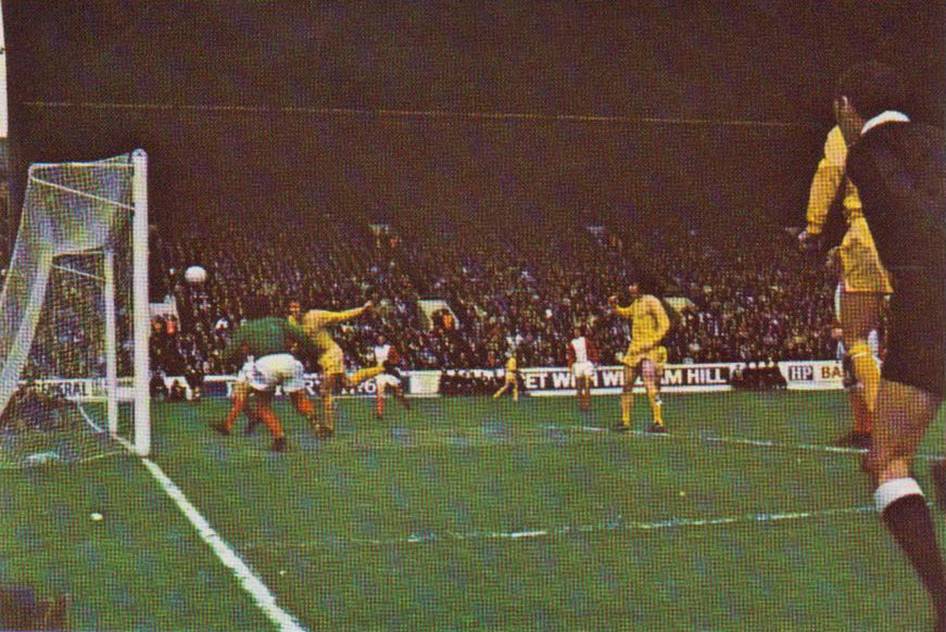 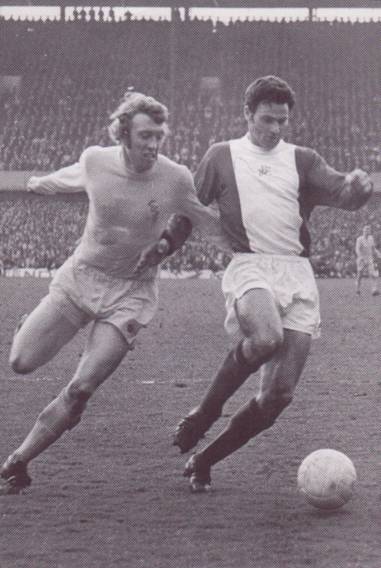 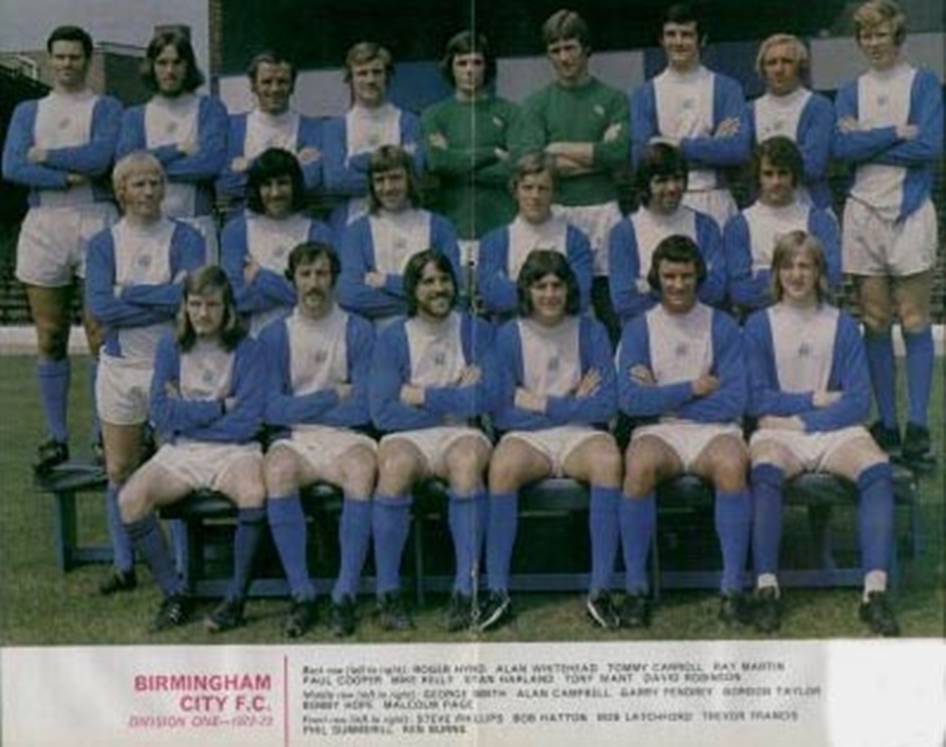 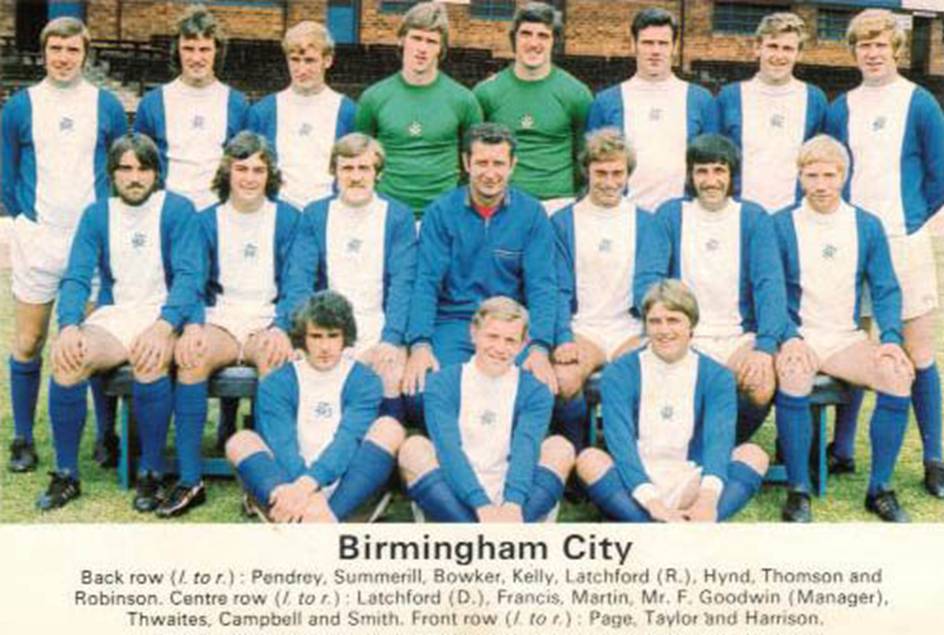 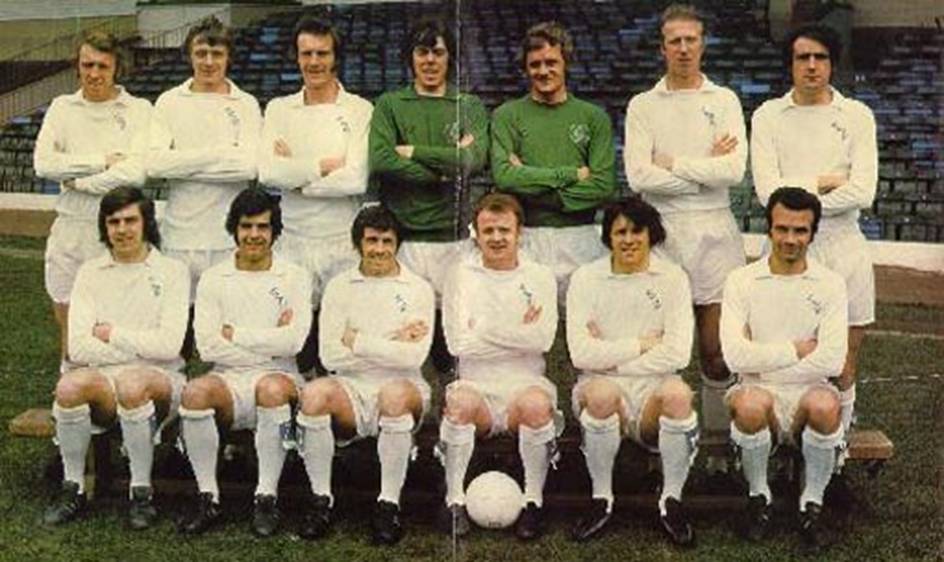 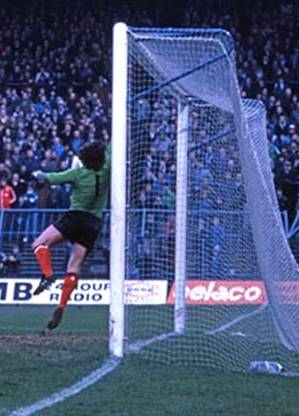 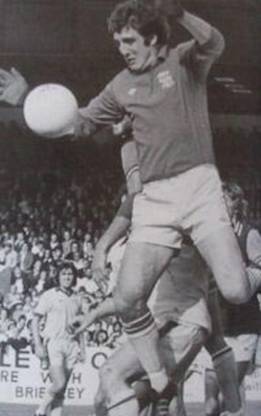 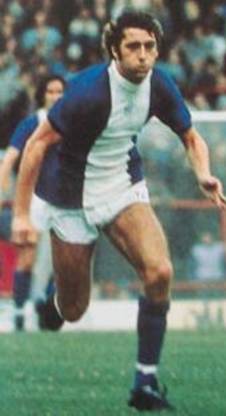