Sometimes football can be cruel, and Leeds United found out just how cruel it can be at Old Trafford. Only four days after producing what must have ranked as their worst performances of the season at , looked good value for a point at Old Trafford and could consider themselves extremely unlucky to have come away with nothing.

Having fought for almost an hour with ten men, after goalkeeper Mark Beeney, preferred for this match to John Lukic, was sent off for a deliberate handball outside his penalty box after only seventeen minutes, United looked to be holding out until Roy Keane put Manchester ahead with only eighteen minutes left on the clock.

Stand-in goalkeeper Lucas Radebe started as substitute but was brought on immediately in place of Mark Ford when Mark Beeney was given his marching orders. Lucas Radebe looked confident in goal, as he did when he took over from the injured John Lukic against in the previous month, and he pulled off several important saves.

Manager Howard Wilkinson had made four changes from the game at , bringing in Nigel Worthington at left back, Mark Beeney in goal, replacing John Pemberton with Paul Beesley and restoring Mark Ford in midfield. United displayed the confidence that had been lacking at Stamford Bridge and, after the sending off, they re-grouped and battled for every ball against a nervy Manchester United side that could not get into top gear.

defended resolutely and Keane’s goal was the only defensive lapse, making it all the more painful for them to take nothing from the game. dominated the game for long periods and they pushed hard for a second goal which, through a combination of poor finishing and good defending, never came.

Wilkinson’s men failed to create many real opportunities at the other end, their best efforts coming from Andy Gray who had two fine long range shots turned around the post by Peter Schmeichel in the first half.

Even the presence of former favourite Eric Contana couldn’t get firing on all cylinders, and Andy Cole failed to produce the goods in front of goal and was replaced by Lee Sharpe in the second half. Alex Ferguson also took off the ineffective Brian McClair, replacing him with Paul Scholes, but the crowd became increasingly frustrated at their team’s inability to trouble Lucas Radebe. The keeper looked comfortable when he was called into action, turning away a shot from Brian McClair and then holding a fierce volley from Ryan Giggs.

Roy Keane hit his sixth goal of the season in the seventy-second minute when Eric Cantona laid the ball off to him on the edge of the area, and he twisted and turned before a gap seemed to open for him to shoot right-footed across Lucas Radebe and into the net from eighteen yards.

Eric Cantona missed a number of good chances to increase his side’s one goal advantage, but late in the game he blazed over from good positions on two occasions without even testing Lucas Radebe. But it was the Frenchman who came closest to putting the game beyond United’s reach when substitute David May teed the ball up for him and he crashed his shot against the crossbar and the ball rebounded to safety.

After the barracking and jeering of the team at , the travelling faithful applauded their team off the pitch at Old Trafford, and deservedly so. 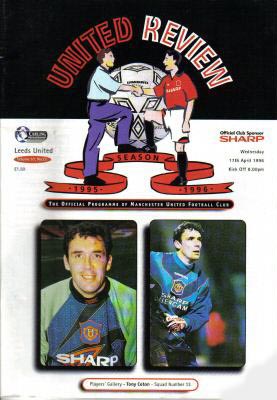 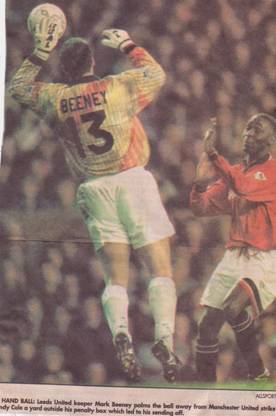 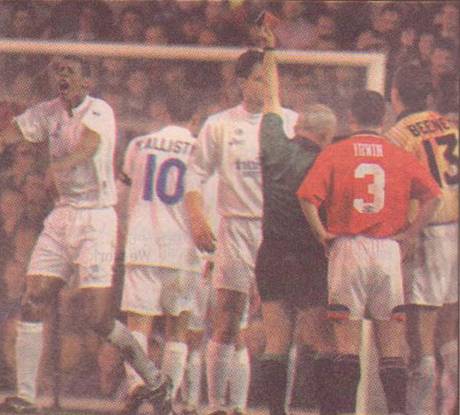 Mark Beeney handles and gets his red card from the referee 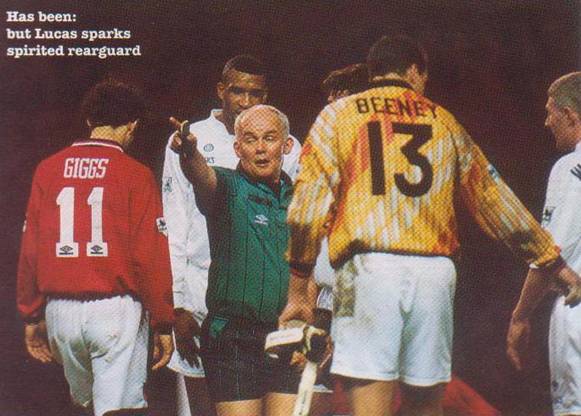 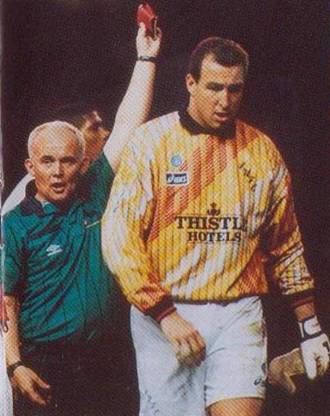 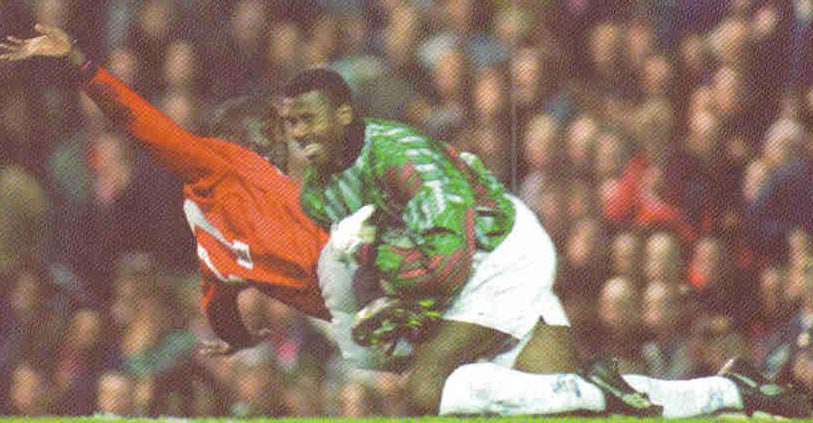 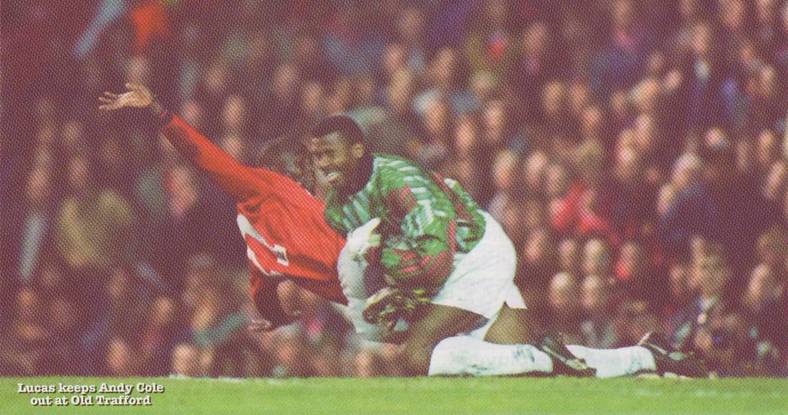 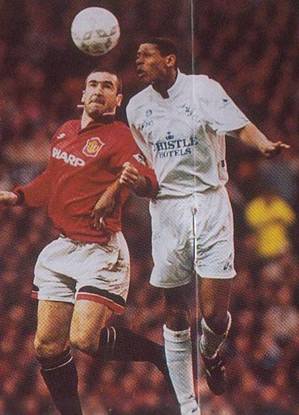 clutches of David May 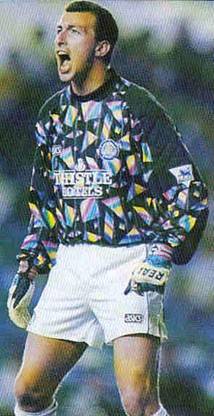 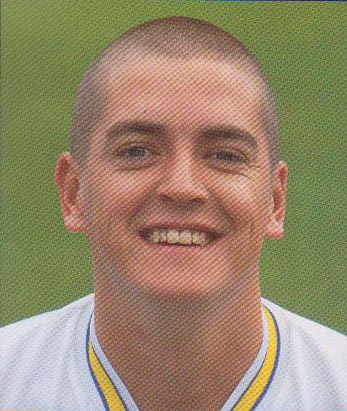 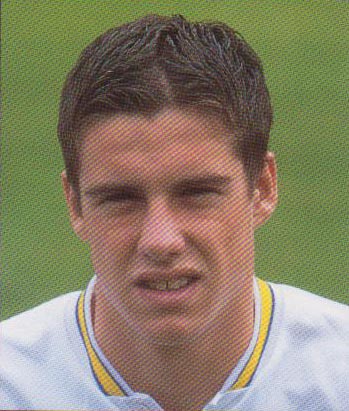 but soon got sent-off 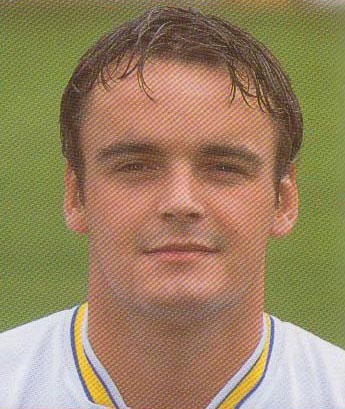 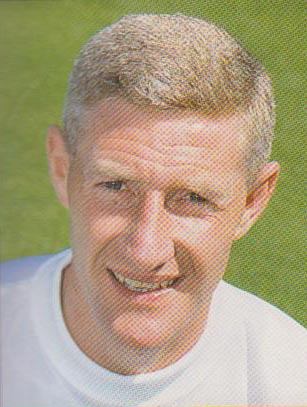 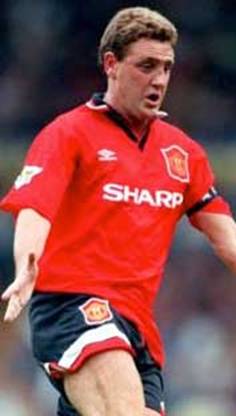 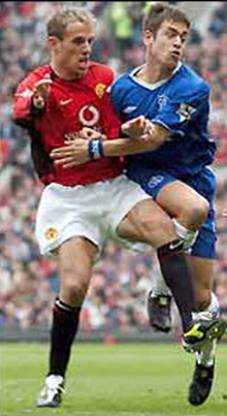 Manchester had Steve Bruce, substitute David May and Phil Neville in defence 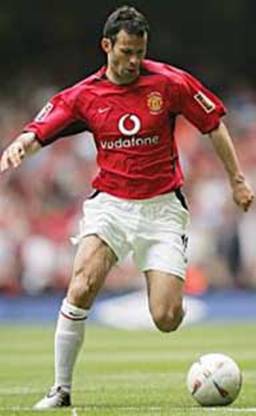 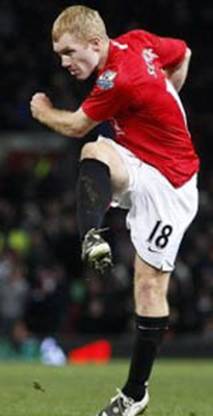