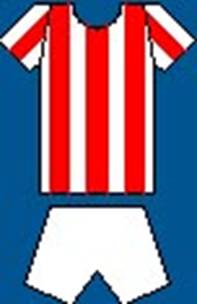 Leeds United conceded five goals for the first time in a hundred European ties as their chances of making further progress in their UEFA Cup campaign virtually disappeared. A 3-5 defeat by a talented and well-organised PSV side left Howard Wilkinson’s men reeling and needing to win by three clear goals in the second leg in . Against the Dutch side that were second only to the crack side in their country it seems a forlorn hope and one which, on the night’s performance, would be in the miracle category.

It was united’s one hundredth competitive game in Europe but it turned into a night to forget when defensive inadequacies were again in evidence in United’s display. The defeat in the first leg was all the harder to accept because Wilkinson’s men had pulled themselves back from a 1-3 score-line at half-time to draw level by the seventy-second minute, but all the hard work went to waste in a disastrous last seven minutes when Luc Nilis, probably the best player on the night, stole the show by scoring twice.

It could have ended up 7-6. Tony Yeboah missed two chances that he would normally have put away, one from three yards and the other from eight yards, then Brian Deane could have scored and there looked to be a penalty when Noel Whelan was brought down.

It had all started so well for United, when Gary Speed, won a firm challenge in the PSV area to give his side a flying start with a sixth minute strike from a Gary McAllister free-kick as he glanced a fine header past Ronald Waterreus in the PSV goal. The lead lasted barely four minutes before Rene Eikelkamp, playing instead of the injured Brazilian star Ronaldo, scored with an easy close range chance after the impressive Luc Nilis had brushed aside John Pemberton and a Tony Dorigo tackle was deflected into his path.

United lost influential midfielder and goal-scorer, Gary Speed, who was forced off in the twenty-sixth minute and the young Andy Couzens substituted. PSV had what luck there was going, and a large slice of it came in the thirty-fifth minute, when Wim Jonk’s shot was deflected past the helpless John Lukic by Marciano Vink. Just four minutes later Jonk hammered in a superb volley after Luc Nilis had flicked the ball up with his toe from a free-kick and there seemed no way back for United as they still questioned the validity of the awarding of the free-kick.

Two goals behind United had little option but to go on all out attack and Brian Deane and Tony Yeboah both missed easy chances as United mounted a spirited response. However it was Tony Yeboah who sparked the United revival in the forty-eighth minute when he took possession from a throw in, twisted sharply in the penalty box and laid on a perfect cross for Carlton Palmer, who had time to steady himself before blasting the ball in from fifteen yards. Gary McAllister got the equalizer in the seventy-second minute with a delightfully curled shot after the Dutch keeper, Ronald Waterreus had punched a Gary Kelly cross straight to the United skipper.

With eighteen minutes to go the game was evenly poised but, unfortunately for United, Luc Nilis showed his class with two brilliantly executed goals to give PSV a two goal advantage to take into the second leg at . With seven minutes still left on the clock he gave Lukic no chance when, after he had been allowed to run round the United defence to meet Jonk’s free-kick, again hotly disputed by Leeds, he volleyed a superb left foot shot into the net. With just three minutes left the Belgian got his second and PSV’s fifth as he exchanged passes with Dutch under twenty-one international Cocu and left John Pemberton in his wake before calmly side-stepping Lukic and knocking the ball into the unguarded net. 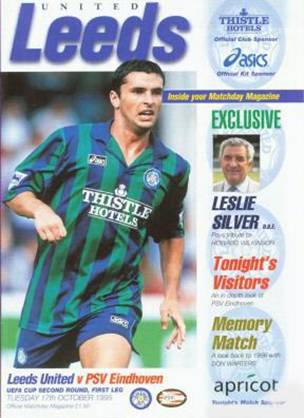 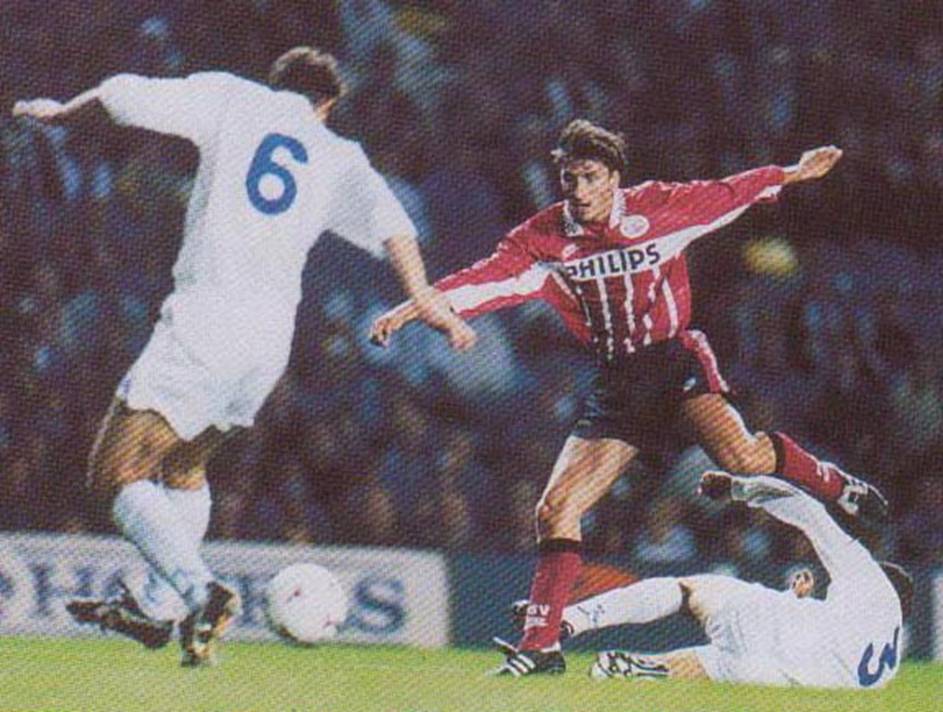 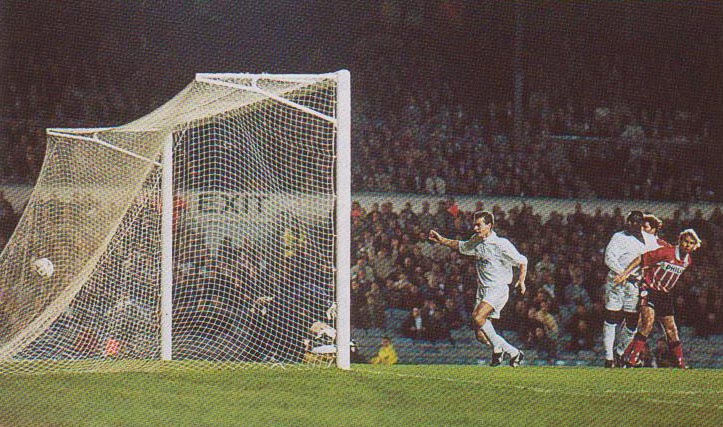 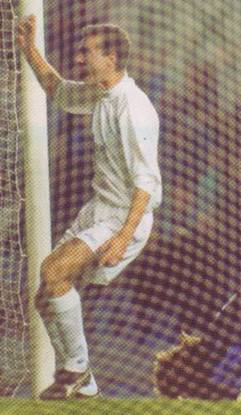 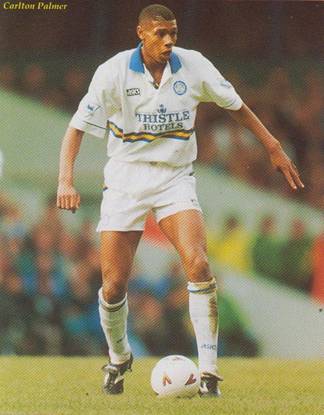 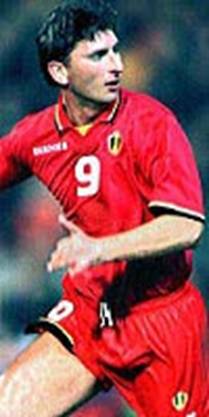 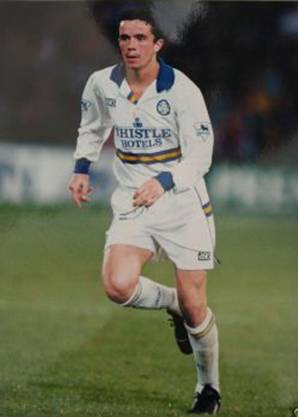 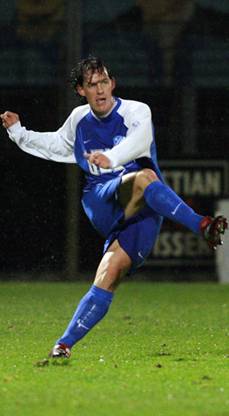 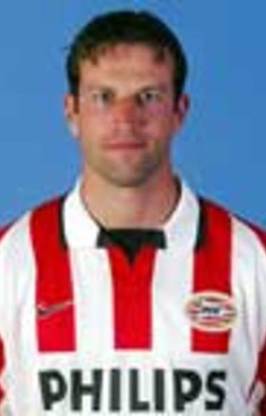 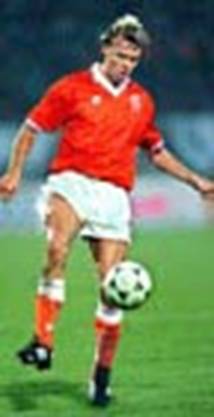 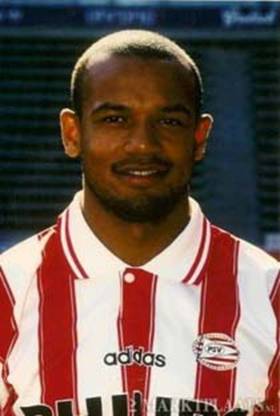 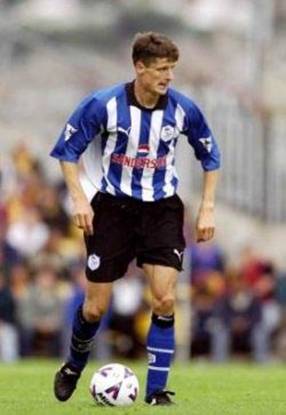 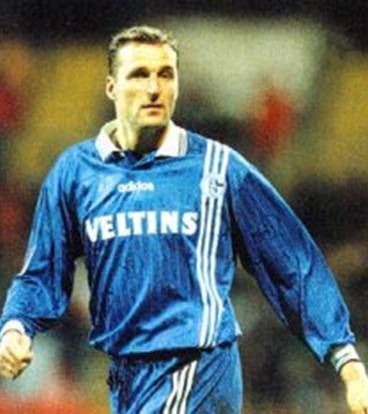 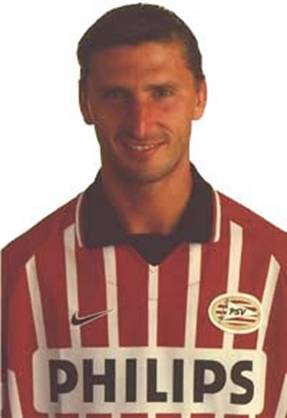 Rene Eijkelkamp, Luc Nilis and Philip Cocu were the forwards 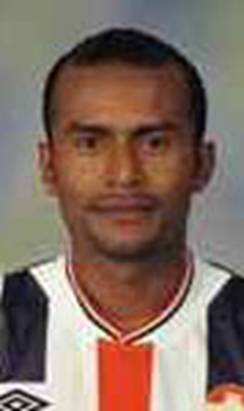 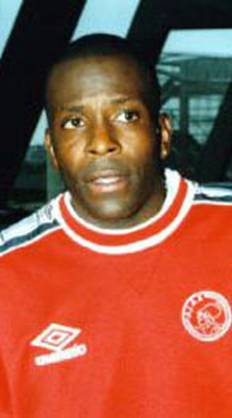